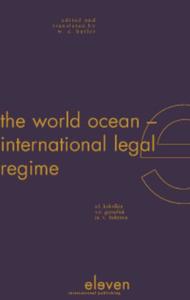 Originally published in Russian, this book is the most comprehensive treatise to appear on the subject of the law of the sea. It covers all expanses of sea which comprise the World Ocean and offers new detail on the Russian Arctic, the Caspian Sea, the Black Sea Straits, the Gulf of Finland, and the Russian continental shelf. In a number of instances the book criticizes Russian legislation for the failure to adequately implement the 1982 Convention on the Law of the Sea and the law of the sea generally for the failure to satisfactorily address the threats and challenges of the twenty-first century. This volume gives more attention to the activities of international organizations in maritime legal matters than one normally encounters in Western works on the subject. Furthermore, as Russia plays a central and influential role in world maritime policy, a book that specifically deals with Russian approaches in this field cannot fail to be of importance to anyone interested in the law of the sea.