The Constitution in Private Relations 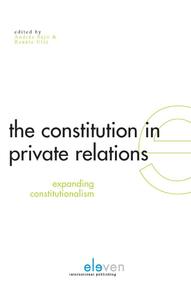 The contributors of this volume address various issues pertaining to 'Third Party Effect'. It provides an in-depth analysis of jurisprudence, placing problems in a comparative legal and theoretical perspective.

According to a classical tenet of constitutionalism the constitution and constitutional law deal with state actors. In the 20th century the concept of 'third party effect' emerged, which has seen constitutional rights and principles apply in private relations as well. This raises various questions, such as what are the jurisprudential and political reasons of this change? Is this concept brought about by the welfare state? What are its practical consequences? Is individual liberty enhanced when the state claims to promote a right? How do such understandings influence the role of constitutional and supreme courts? Are there equivalent doctrines to the third party effect? How does the trend influence government spending and redistribution? How does the US 'state action' doctrine compare with the third party/horizontal effect doctrine familiar in other domestic and international jurisdictions?