After Antiquity ceramics and society in the Aegean from the 7 th to the 20 th century A.C. / druk 1 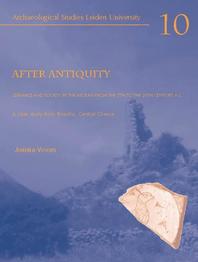 This is the first book in which Post-Roman pottery in Central Greece and in the Aegean is treated comprehensively, covering the entire period from Late Antiquity to Modern times. This richly illustrated study offers an extensive typo-chronological discussion of the Medieval and Post-Medieval wares found in Boeotia, as well as a discussion of the relation between this pottery and Medieval and Post-Medieval society, economy and culture.

In the first part of the book, the main problems related to chronology and terminology of Post-Roman ceramics in the Aegean will be discussed. In addition, a history of research will be presented, beginning with pioneers in the 19th century via David Talbot Rice to more recent developments such as underwater archaeology and surface surveys. Also, the current state of research per period will be reviewed, focussing on large excavations in Constantinople/Istanbul, on the Greek Mainland and Greek Islands as well as on Cyprus.

The second part of the book is focussed on Boeotia. After an introduction of previous research into Post-Roman ceramics in Boeotia, a catalogue of sites with Post-Roman ceramic finds from the field survey of the Boeotia Project will be presented. Furthermore, an effort is made to combine the ceramic data from these sites into a regional typo-chronological classification system, which encompasses 48 diagnostic Medieval and Post-Medieval wares, ranging from locally produced Red Slip wares and amphorae to imported tin glazed wares from Italy and Turkey, such as Maiolica and Iznik Ware. Attention will also be given to the changes in shapes and decoration of the pottery through time, in an effort to establish a relationship between changing vessel shapes and changing vessel function from Late Antiquity onwards.

In the third part of the book, the technological and socio-economic aspects of the Post-Roman ceramics from Boeotia will be explored. Firstly, the socio-economic infrastructure for the production and distribution of pottery from Late Roman times onwards is discussed, including the location of major towns, ports, rural settlements, land and sea routes as well as the presence of artisans/craftsmen, merchants, markets, fairs and the role of the governing classes. Also, the production and distribution of pottery in Post-Roman Boeotia will be discussed from a local perspective, based on the archaeological evidence as well as on written sources and ethnographic/ethnoarchaeological studies of traditional pottery production in Early Modern Greece and Cyprus. In addition, the Boeotian material is discussed in a wider socio-economic context. Here models from archaeology and sociology, such as the "world-system" theory of Immanuel Wallerstein are used in an effort to understand the processes of production, prices, import and distribution of the tin-glazed wares in the Aegean area from the 16th to the 18th centuries (e.g. Maiolica from Italy, Iznik and Kütahya Wares from Turkey).

In the fourth part of the book, the focus is on the changing use of table equipment and the history of dining habits in the Eastern Mediterranean from Late Roman to Early Modern times. Apart from the pottery, Medieval and Post-Medieval texts (ranging from budgets of pious foundations and cookbooks to the 15th-16th century Ottoman tax registers of Boeotian villages and traveller's accounts), as well as pictographic representations of dining scenes from the 5th to the 20th centuries are used as sources of information (e.g. mosaics, frescoes, miniatures).