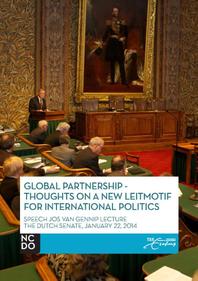 On January 22, 2014, the second Jos van Gennip Lecture was held at the Dutch Senate. The lecture was one of a series of lectures named after former Dutch Senator Jos van Gennip who resigned as Chairman of the NCDO Board in February 2012. The second Jos van Gennip Lecture was entitled 'Global partnership - thoughts on a new leitmotif for international politics'. Horst Köhler, former President of Germany and member of the UN High Level Panel on the Post-2015 MDG's, spoke about global partnership as a leitmotif for challenging international problems. Lilianne Ploumen, Dutch Minister of Foreign Trade and Development Cooperation responded to Mr. Köhlers speech by focusing on the need for global partnerships to end inequality. The speech given by Mr. Köhler, together with a short biography, is featured in this publication.