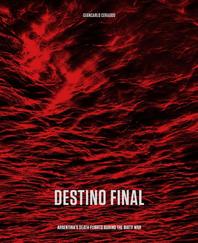 Destino Final is the Spanish term for "final destination", the final arrival place of any plane trip. For at least 5,000 people in opposition to the Argentine military dictatorship, this term acquired an atrocious meaning: drugged and loaded on military planes, infamously known as "death flights", they are thrown, still alive, in the final part of the Rio de la Plata, just before it reaches the Atlantic Ocean, their final, definitive destination.

From 1976 until 1983, a military dictatorship governed Argentina. During the dictatorship, the military waged a war against

"subversion", known in the international press as the so-called Guerra Sucia, the Dirty War, and attempted to purge the country of all individuals they considered to be "subversives". An estimated 30,000 people died at the hands of the military, which executed a systematic plan to exterminate subversives in concentration camps. 4,000 detainees, imprisoned in these centres, were killed. Just a few of their bodies were recovered. Their families are still looking for their remains and are seeking punishment for the guilty. Hundreds of grandmothers await the identification of their grandchildren born in captivity and robbed by the military.

During the development of the project Destino Final, photographer Giancarlo Ceraudo, together with Miriam Lewin, a journalist and ex-desaparecida (disappeared), began an investigation that led to the discovery, after more than 30 years, of five Navy planes used for the "death flights", and most importantly, of the detailed flight plans. Everything was recorded: the plane model, serial number, day, itinerary, pilot's name, mission duration... What has been discovered by the two journalists is now seen by prosecutors as proof and is used for indictments. Lawyers have already renamed them "the most important documents on the dictatorship found in the last 10 years". All these documents are now in the hands of judicial authorities and trial cases have been re-opened and are currently in progress.

Giancarlo Ceraudo's photographic investigation, developed over more than eight years, documents this discovery, as well as the work of the forensic anthropologists, the tenacious fight of the Madres de Plaza de Mayo, the citizen protests, and the on-going court trials. The emotional core of the work is the portrayal of the few survivors, as well as the relatives of desaparecidos, and the interiors of the detention and torture centres which were the stage for these atrocious events, and tracing the dark side of Argentina's modern history.

The photographs are accompanied by documents and material regarding the investigation on the "death flights". Miriam Lewin has written the main text of the book. The introduction is by investigative journalist Horatio Verbitsky. Shorter

contributions are by the famous Spanish judge Baltasar Garzón Real, who took the Argentine naval officer Adolfo Scilingo successfully to trial (he is serving 30 years in a Spanish prison now, sentenced for crimes against humanity), by crash

analyst and aero-nautical physician Enrique Piñeyro on analysing the discovered flight plans, by Taty Almeida - one of the Madres de Plaza de Mayo - on her desparecido son, and by Carlos "Maco" Somigliana on the work of the forensic anthropologists in this investigation.

Destino Final is edited by Arianna Rinaldo, an independent curator, photo editor, Director of the magazine OjodePez, and Artistic Director of the international photography festival Cortona On The Move.