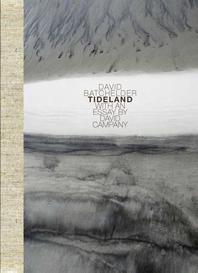 After five years of looking closely through his camera at a small beach, David Batchelder no longer sees the shores as we know them. His vision now is of a private reality within the tideland. In Tideland, Batchelder invites you to join him in his visual journey into a tideland like none that has yet been photographed.

Batchelder uses the camera, not to picture more clearly that which we already know, but to discover and capture the unsung beauty of our and. He shares with us an inexplicable, ambiguous, imaginative and odd world of magical visions - landscapes, spaces, creatures and curious objects, disfigured and eroded by the ocean. Although Batchelder uses digital processes, his approach to creative camera work has its origin very much in the era of film, using a digital camera and Photoshop as one would have used a film camera and a

the viewer's imagination and memory take over and, you too, leave

the beach as you now know it.

In the 1960s, David Batchelder received an MA and MFA in photography from the University of

were exhibited widely, published in Aperture magazine, and can be admired in the following collections: Addison Gallery of American Art, Fogg Museum, George Eastman House, Michigan

David Campany is a writer, curator and artist, working mainly with photography. He has written many books and curated many shows. David has a PhD and teaches at the University of Westminster, London. For his writing, David has received the ICP Infinity Award, the Kraszna-Krausz Book Award, a Deutscher Fotobuchpreis, and the Royal Photographic Society's award for writing.