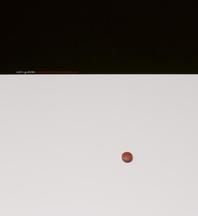 We live in the Universe of Malevich, though we very rarely notice it. Vadim Gushchin photographs "Everyday Objects" in such a way that it is immediately obvious that they have originated from Malevich's Black Square.

The main idea of design is the sparing use of form. El Lissitzky, a pupil of Kazimir Malevich, was the first to formulate this idea in relation to the industrial object. Malevich used the expressive means of painting sparingly. Lissitzky transformed his world for the needs of production. Consequently, Malevich can be found in the depths of an industrial object.

In his rejection of illusionism, Vadim Gushchin follows in the path of Malevich. Because when we talk about pure forms, we recall Malevich - his works, reduced to the depiction of the pure plane.

A paradoxical effect arises when photographing objects. It would appear that reality is being documented. That is to say, things are presented as they are. But in fact, in order to do this, things are taken beyond their usual context. That is, each separate object is placed in a meta position in relation to reality. And the better the shooting is done, the more accurately the object is reproduced, and the bigger the size, and the better the lens, the more that object will be alienated from its habitual existence. Once photographed, objects rise above themselves. In Gushchin's artistic space, industrial objects are transformed into sculptures. And each of these sculptures gives witness to its source - the Universe of Malevich.

Photography is the royal road into perspective-unconscious. That is, more or less, what Walter Benjamin wrote about in A Short History of Photography. His idea became the principle of development of modernity in this art form. Vadim Gushchin subjects it to scrupulous analysis. In his "Cultural Treasures" he complicates the conditions of the experiment, introducing colour into his formerly classical black and white series of still-lifes.

It comprises a few series, the heroes of which are, for the most part, cultural objects. The books in his photographs do not simply refer to a specific time on the strength of the author/title, but due to their thumbed and faded state they cause tactile-olfactory experiences to arise from the past. Absolutely brand new envelopes demonstrate cardboard elasticity and unwittingly one has to suppress an involuntary reflex of the fingers folding a note to place it there. Musical laser discs, shimmering in the rays of a halted beam of light, as if they visually radiate music, cause something within us to resonate. The objects of this series address namely the cultural subconscious and compel one to think about the origins of that very culture which, as it turns out, is rooted so deeply inside us.

With regard to the working surface of Gushchin's still-lifes, it should be perceived as being abstract-material. Except for in one or two series (for example, with books, which could be described as the most realistic due to the special spirit of historicism which is manifest in it), it does not remind us of anything. Because the setting is photographed from above, the working surface hovers in space, creating a support for the objects, but not for our efforts to perceive, which are constantly thrown into bewilderment that corresponds in Gushchin's compositions to gaping darkness that opposes the objects' characteristics. Perhaps this is the most expressive image of his still-lifes, found long ago and cultivated by him. It is the basic concept of his photographic philosophy. Gushchin's photography is not created from light , but rather its absence, structuring all of his visual imagery. The heroes in his still-lifes are estranged from all earthly things, like the colour planes of Suprematist compositions. Gushchin's photography reveals the fundamental duality of culture: the abstract nature of objects in it and the specificity of colour.

Vadim Gushchin (born 1963) has been a freelancer artist since 1988. He lives and works in Moscow. Since 1995 he has had about 30 solo exhibits in galleries and museums in Russia and abroad, including the solo exhibit Wood and Bread at the 2006 Biennial of FotoFest Houston, USA. His works have been presented in conceptual group projects, among them "A la Recherche du Père" (1993, Paris), "Neue Fotografie aus Russland" (1995, tour in 5 Cities of Germany), "Idea photographic after Modernism" (2002, Santa Fe, USA), Triennial of Photography in Odense, Denmark 2006, "Contemporary Russian Photography" (2012 Biennial FotoFest Houston, USA. His works are featured in several museum collections in America and Europe, the MoMA and the Pushkin State Museum of Fine Art in Moscow, and in many private collections all over the world.