Strikes around the world / druk 1 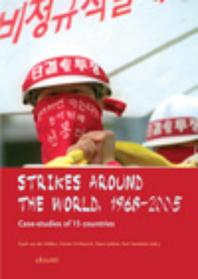 Are strikes going out of fashion or are they an inevitable feature of working life? This is a longstanding debate. The much-proclaimed ¿withering away of the strike¿ in the 1950s was quickly overturned by the ¿resurgence of class conflict¿ in the late 1960s and 1970s. The period since then has been characterized as one of ¿labor quiescence¿. Commentators again predict the strike¿s demise, at least in the former heartlands of capitalism.Patterns of employment are constantly changing and strike activity reflects this. The secular decline of manufacturing in mature industrialized economies is of major importance here (though the global relocation of manufacturing may lead to some ¿relocation¿ of strikes). Simultaneously we see the growth of disputes in the service sector (the ¿tertiarization¿ of strikes). This is evident particularly in public services, including health care, social care and education, and is accompanied by a ¿feminization¿ of strikes, given the prevalence of women working there. This unique study draws on the experience of fifteen countries around the world ¿ South Africa, Argentina, Canada, Mexico, United States, Korea, Australia, New Zealand, Belgium, Denmark, France, Germany, the Netherlands, Sweden and the United Kingdom. Covering the high and low points of strike activity over the period 1968¿2005, the study shows continuing evidence of the durability, adaptability and necessity of the strike.