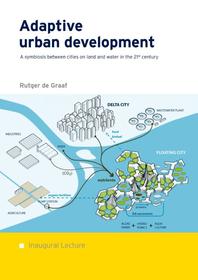 A symbiosis between cities on land and water in the 21st centuryAdaptive urban development is the design, construction and continuing evolution of urban areas to anticipate and react to changes in the environment and society. These changes include both processes within the city itself and external developments. It is expected that until 2100 a total of 5 billion people will move to cities. Per day this means a 150,000 people start to live in a city. In the same period resources such as fossil fuels, fresh water resources, phosphates and fertile topsoil are running out. This unprecedented urbanization process will convert a large part of the fertile croplands in urban areas. At the same time the food demand from this shrinking productive area will double due to population increase and rising living standards. Most of the urbanization will take place in vulnerable delta areas. To create a perspective to deal with this huge challenge in the 21st century, two things are needed. First, the current parasite cities need to transform into flood proof ecocities. Transforming the existing cities, however, will not be enough to deal with the challenges the world is facing. The second component of the strategy therefore means that a part of the cities and food production should be located on the water to create more space.