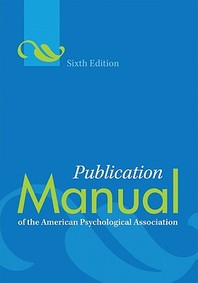 The Publication Manual of the American Psychological Association is the style manual of choice for writers, editors, students, and educators in the social and behavioural sciences. It provides invaluable guidance on all aspects of the writing process, from the ethics of authorship to the word choice that best reduces bias in language. Well-known for its authoritative and easy-to-use reference and citation system, the Publication Manual also offers guidance on choosing the headings, tables, figures and tone that will result in strong, simple, and elegant scientific communication.

The Sixth Edition offers new and expanded instruction on publication ethics, statistics, journal article reporting standards, electronic reference formats, and the construction of tables and figures. The Sixth Edition has been revised and updated to includenew ethics guidance on such topics as determining authorship and terms of collaboration, duplicate publication, plagiarism and self-plagiarism, disguising of participants, validity of instrumentation, and making data available to others for verification;new journal article reporting standards to help readers report empirical research with clarity and precision; simplified APA heading style to make it more conducive to electronic publication; updated guidelines for reducing bias in language to reflect current practices and preferences, including a new section on presenting historical language that is inappropriate by present standards; new guidelines for reporting inferential statistics and a significantly revised table of statistical abbreviationsnew instruction on using supplemental files containing lengthy data sets and other media; significantly expanded content on the electronic presentation of data to help readers understand the purpose of each kind of display and choose the best match for communicating the results of the investigation, with new examples for a variety of data displays, including electrophysiological and biological data; consolidated information on all aspects of reference citations, with an expanded discussion of electronic sources emphasising the role of the digital object identifier (DOI) as a reliable way to locate information; andexpanded discussion of the publication process, including the function and process of peer review; a discussion of ethical, legal, and policy requirements in publication; and guidelines on working with the publisher while the article is in press. Key to this edition of the Publication Manual is an updated and expanded Web presence.

Visit the APA Style web site toLook up additional supplemental material keyed to the bookTest your knowledge of APA Style with a free tutorial on style basicsLearn about the changes in the sixth edition with a free tutorial reviewing key revisionsSign up for an on-line course to enrich and enhance your understanding of APA StyleRead the APA Style blog and share your comments on writing and referencingConsult frequently asked questions to sharpen your understanding of APA StyleExamine additional resources on such topics as ethics, statistics, and writingFamiliarise yourself with submission standards for APA books and journalsWhat's New in the Sixth Edition?Book has been updated to acknowledge and incorporate advances in computer technology. New discussions of the creation, submission, and storage of supplemental data. New guidelines for referencing electronic sources.

New and expanded reference examples for a variety of on-line sources. Redesigned APA Style website, expanded to provide tutorials, on-line courses, and other resources for learning APA style. Book has been reorganised and streamlined for ease of useOrganised to describe the writing process from idea to publication, it begins with background information on ethical issues in publishing, then moves on to manuscript structure and content, then writing style and rules, then graphics and references, then guidance on working with the publisher.

Sample paper section has been moved up and featured to better exemplify manuscript structure and contentLike discussions have been moved to one place in the book, with discussions of function followed by instruction on form. Focus has been broadened to include readers in the behavioural and social sciences. Information specific to APA has been moved to the web, where it is more broadly accessible and can be updated frequently.

New examples throughout the book have been drawn from publications in education, business, and nursing as well as psychology.