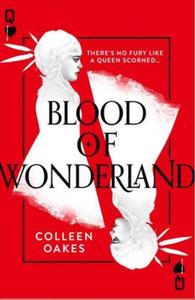 Dorothy Must Die meets Alice in Wonderland! Heroes become villains in the twisted YA sequel to Queen of Hearts...Perfect for young adult fans of Tim Burton's Through the Looking Glass.The once-future Queen of Hearts, Princess Dinah, has been exiled from Wonderland. Her vicious father who she always feared has framed her for a brutal murder and turned the kingdom against her.Now hiding in the mysterious Twisted Wood with only her war steed at her side, Dinah is faced with a choice - to leave Wonderland forever or stay and fight for the throne.A chance encounter with a long-lost enemy of the kingdom brings Dinah more allies than she ever could have imagined. But before battle, Dinah must confront truths about her heart and her destiny - no matter how dark those secrets may be.Revolution is rising in Wonderland. Dinah's war has begun.