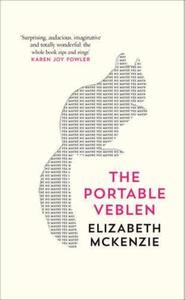 Meet Veblen: a passionate defender of the anti-consumerist views of her name-sake, the iconoclastic economist Thorstein Veblen. She's an experienced cheerer-upper (mainly of her narcissistic, hypochondriac, controlling mother), an amateur translator of Norwegian, and a firm believer in the distinct possibility that the plucky grey squirrel following her around can understand more than it lets on.Meet her fiancé, Paul: the son of good hippies who were bad parents, a no-nonsense, high-flying neuroscientist with no time for squirrels. His recent work on a device to minimize battlefield trauma has led him dangerously close to the seductive Cloris Hutmacher, heiress to a pharmaceuticals empire, who is promising him fame and fortune through a shady-sounding deal with the Department of Defence.What could possibly go wrong?