The art of thinking 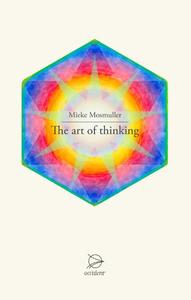 For most people Intelligence is a beloved talent, a capacity to be proud

of. At school it is one of the first things to be examined. There are diverse

tests to measure the IQ quantitatively. Besides, human intelligence is

the example for artificial intelligence. However ingenious this artificial

intelligence may become, there is not even a remote possibility of its

sequences of decisions, when they have to be formulated by technical

intelligence. On the other hand, for the machine it is possible in less than

But as an area of spirituality - intelligence is not acknowledged. There

we want to penetrate into the deeper wisdom of existence.

In this book the author has started to prove the contrary. Intelligence is the

purpose than this very activity - intelligence proves its spirituality itself. We

don't even need a high IQ, although its level rises itself as a result of such

activity. In addition, we don't need any faith - this also will emerge through

this activity. The only thing we really need is a certain discipline to dedicate

our time to intelligence - twenty minutes or so, two times a day.

Mieke Mosmuller (born in Amsterdam, 1951) studied medicine at the Uni

tising doctor. She is also the author of novels and spiritual-philosophical

books. Since 1994 she has published more than forty books, some of which

have been translated into German, English and Danish. With the Dutch

of interviews undertaken between 1995 and 1998. Mieke Mosmuller gives

lectures and workshops in the Netherlands and Belgium and, since 2009,

also in Germany, Denmark and Switzerland.