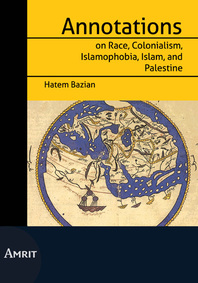 A wonderful, splendid, erudite, accessible and entirely original book! In Hatem Bazian's capable hands, this book offers its readers a decolonial map to navigate the difficult questions of our time. This is a tour de force in decolonial thought and Muslim decolonial politics of liberation! A must to read..."

"Annotations on Race is a tour de force of incisive running commentary on the events that are shaping the world. With great passion and verve, the book covers an eclectic array of topics ranging from Muhammad Ali to the Arab Spring, from Du Bois to the NAFTA and immigration from Mexico... Bazian shows that insights in a decolonial reading is both an understanding and a call to action."

The veneer of post-racial America, the insistence on color blindness across Europe, the callous treatment of refugees and the brutalities inflicted on Muslims and Islam, all derive from lies perpetrated by the powerful (and the powerless) to perpetuate white supremacy. Dr. Hatem Bazian's book reveals the truth - that the twisted roots of institutional racism, religious animosity and western arrogance are planted deeply in the fertile soil of the West; their legacies continue to shape our lives in the 21st century. Dr. Bazian describes their manifestations, their consequences and the sustained efforts to resist them, and maintain human dignity. This is a powerful set of essays, in vivid and compelling terms, that speaks to the most urgent matters of the 21st century."

"Dr. Hatem Bazian's, "Annotations on Race, Colonialism, Islamophobia, Islam and Palestine," is a wide-ranging examination of many of the issues connected to what Dr. Martin Luther King, Jr. described as the evil triplets -racism, militarism and poverty. Dr. Bazian engages in a masterful study of these themes in both an American and international context focusing on the underlying structures facilitating their existence and entrenchment. This work is essential reading for anyone seeking to move beyond the headlines and to understand the underlying realities shaping some of the most pertinent and vexing issues of our day."