The economic consequences of the Dutch / druk 1 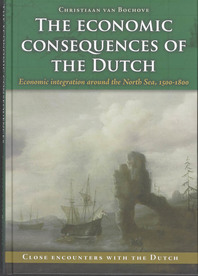 Between 1550 and 1800 the Northern Netherlands went through a period of intense economic development. This did not leave the surrounding regions untouched. International trade blossomed, tens of thousands of foreign workers found employment in the Netherlands and many millions of guilders were channelled abroad to finance foreign commercial undertakings and government policies. This book offers the first systematic analysis of the international impact of Dutch economic development and investigates the economic consequences of Dutch dominance in the areas bordering the North Sea. By using a wide variety of sources and literature Christiaan van Bochove describes the international flows of goods, people and money, focussing attention on the effects on the prices of everyday goods, the wages of labourers and interest rates. This book shows how, by the end of the eighteenth century, the development of the Dutch economy had turned the North Sea region into an integrated spatial economy that operated at the frontier of what was technologically and institutionally possible.