Art of the Film: Fantastic Beasts and Where to Find Them 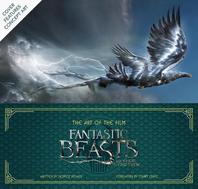 Step inside the world of the talented art departments who, led by Academy Award®-winning production designer Stuart Craig, were responsible for the creation of the unforgettable characters, locations and beasts from the eagerly anticipated new adventure in J.K. Rowling's Wizarding World.The Art of Fantastic Beasts and Where to Find Them, edited by Dermot Power, concept artist on the film, takes you on a magical journey through a design process every bit as wonderful as that encountered by Newt Scamander in the wizarding world: From the earliest gatherings of the artists, designers and filmmakers to the magical time of the film's production itself at Leavesden Studios.Bursting with hundreds of production paintings, concept sketches, storyboards, blueprints and matte paintings, and filled with unique insights about the filmmaking journey from Stuart Craig and the artists themselves, this superb book - officially licensed by Warner Bros. Consumer Products - presents a visual feast for readers, and will welcome fans of Harry Potter films into the world of Fantastic Beasts and Where to Find Them.