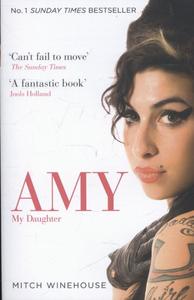 No. 1 Sunday Times Bestseller.'Can't fail to move' The Sunday TimesALL AUTHOR PROCEEDS DONATED TO THE AMY WINEHOUSE FOUNDATION.As an artist, she had few peers. Her lyrical prowess and timeless contralto vocals made her an instant revelation when her debut album Frank was released in 2003. And as her star continued to rise it became evident that this seemingly delicate girl from north London was much more than just a precocious talent.Genius, inspiration, icon; there are many ways to describe Amy Winehouse, but it was her wit, charm and lust for life that cemented her place in the hearts of her fans.Here, using exclusive extracts from his own personal diaries, Amy's father and confidant Mitch celebrates what influenced his daughter. Documenting her early years from Sylvia Young to the Brit School, and the darker side of her life as she struggled to cope with her addictions under the glare of the media spotlight, he gives new insights.With never before seen photos, notes and drawings, this book brings together the many layers of Amy's life - the personal, the private and the public - to create an honest and intensely moving account of the life of the most talented recording artist of her generation.